Hey, folks. It’s been a while since I blogged on here about my personal events. Well, I’m going to be hitting up a local/regional venue known as PodCampAZ. I’m going for a few reasons, but mainly because I’ve discovered a whole subculture out here of social media mavens and producers right here, in Phoenix! 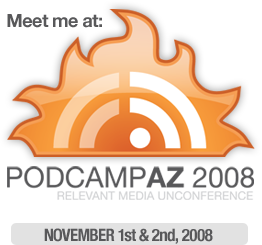 It’s no ordinary conference, where people pay a large amount to attend. Instead, PodCampAZ is based on a BarCamp-like “unconference.” For lack of better words, it’s like a massive LAN Party with Speakers on topics. No sales, no pitches, no BS. It’s quite literally, a perfect conference with topics relating to new media, social media, networking, blogs, podcasting, video and much more.

PodCampAZ is FREE to attend. I admit, I didn’t know this event was free until Ms. Herr let me know as we enjoyed some truly epic Philly sandwiches in downtown Scottsdale. Of course, an optional, voluntary and nominal $25 is also cool to do. Pre-registration and a donation nets you a t-shirt and faster registration when attending the event.

I’m in. I believe I have a few folks from work, Infusionsoft, who may attend. What about you? Tweet at me on Twitter or jot some comments below and let me know if you’re interested in going. We could setup a car pool and stuff.